It’s weird to see your face in a Target ad.
But sometimes, the universe smiles on you – and Reina Castellanos knows that feeling.

Reina, a graduate of Valencia’s Graphic and Interactive Design program, never dreamed she’d become one of one of the faces of a national campaign for Target stores. But last year, during Hispanic Heritage Month, Reina was posting some of her artwork on her Instagram page, so she decided to tag her designs with these hashtags: #latinxdesigner, #latinxillustrator.

“At the time, I did not have a portfolio website,” says Reina, 34, knowing that her design professors would go nuts if she admitted that. “At the time, I only had my Instagram, where I was showing my work. And out of nowhere , I got a DM (direct message) from the Target Instagram account.

“At the time, I was like: Excuse me? I was starstruck.”

Turns out, the store’s social media manager had been scrolling the internet – and discovered Reina’s designs. She said, “Oh my god, we love your work. We’re thinking about a project. Do you have some time to meet in the next few weeks?”

One meeting led to another and, over the course of a year, Reina put together designs for a series of products that Target is selling during Hispanic Heritage Month, which runs from Sept. 15 to Oct. 15.

Today, Reina’s artwork can be found on notebooks, coffee cups and other items.
She’s happy to talk about it now, but for a year, Reina couldn’t tell anyone, not even her siblings and other family members.

“It’s been kind of funny and nerve-wracking, having to keep it secret,” she said. “When you’re catching up with family and friends, and they say, ‘What have you been up to?’ You’re biting your tongue and saying, ‘Oh, just hanging out, doing work.’ ”

At first, Reina thought she would just be designing for products.

“All the products – or at least, my work on them --  were done last year. And then, this year, I thought it was done. Then I got contacted by the marketing team and they were like: We want to do additional visual work and maybe for social media,” Reina recalls. “And, oh by the way, would you be cool being part of the commercial, part of the 30-second spot?”

Her answer? Yes! Of course!

During those conversations, Reina got to talk a little bit about herself, her childhood in Venezuela and moving to Florida in middle school, when her parents, both educators, decided to leave Venezuela and move to Orlando. She talked about things that influence her work, including her parents’ collection of “arte ingenuo” or naïve art or popular art from Venezuela.

“I’m really happy that the Target team wanted to focus on the individual stories of the people who are part of the campaign. If you see the ads and the 30-second commercial, you’ll see that we’re real people, not models or stand-ins.”

Today, the Valencia grad (class of 2008) – who went on to earn her bachelor in fine arts degree from the Savannah College of Art and Design and a master’s degree in fine arts for emerging media from the University of Central Florida -- is relishing the moment.

Since the campaign launched, Target’s Instagram and Facebook ads have sent hundreds (thousands?) to her Instagram account. “A lot of people have been reaching out to me and everyone in the campaign. It created a connection between us and the actual consumers,” she says. “A lot of people from tons of different places in the US said, ‘Wow, I’m from the same neighborhood as you in Venezuela.’ Things like that. It’s been a really great way of connecting, maybe more authentically.”

But the impact may be longer lasting than this year’s Target campaign.

“It’s too early to tell,” says Reina. “Definitely people have reached out, they’re more interested in seeing what I do next. But I’m not quite sure what the next thing is. I’m still riding this wave.”

The feedback from consumers has been good, and after many people asked if she sold prints of her work, Reina opened a print shop online. “People are inquiring, do you do prints or paintings? Can I buy more of your stuff? That’s encouraging,” she says.

And with Target partnership, her goal is simple. “I hope (the cup I designed) becomes your favorite cup for coffee or your favorite notebook. You know, people choosing to have those things in their home, that’s when you know you’ve made it.” 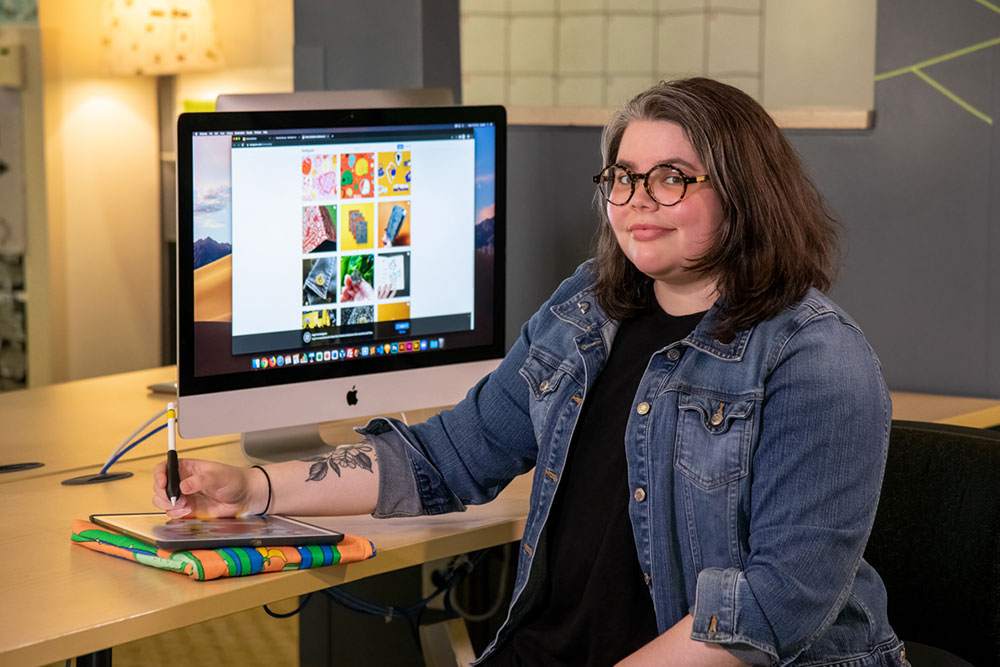 Want to know more about Reina? Check out our quick Q&A:

Q. Were you always interested in art, even as a child?
A: Not really. When we came to the States, I was more interested in music. I was part of choirs and singing groups in school. At one point, I was learning to play the bass and wanted to be in a band. It wasn’t until my last year in high school, when I transferred to a different school, and I discovered it was too late for me to join the choir. I wanted to do something on my own… the counselor told me I could take some art classes. So I took a painting class and a photography class.

Q: What brought you to Valencia?
A: I wasn’t sure what I wanted to do , school-wise. At one point, I was also interested in photography careers. I thought, ‘I’m going to move to Argentina and be a photographer.’ It was just a thought. But my brother, who’s a year and a half older than me, he had started at Valencia and we lived like five minutes from East Campus. So I was just like, ok, I want to check it out.

Q: Why did you decide to study graphic design?
A: I was looking more in depth at some of the Valencia programs and I thought, ‘Ok, I’m computer savvy and I want something to do with art. I realized early on that I’m not a painter. So I said, I’m going to check out the graphic design – it’s the combination of art and computer. And it kind of took off from there.

Q: What impact did Valencia have on you?
A: A lot of friends that I’m still super close with were in the graphic design program. Some of my first classes were with Kristy (Pennino), the program chair.
I think the design thinking that I had from Valencia -- even though I didn’t want to make websites and I knew I didn’t want to work in a corporate office -- but the thought processes and the design thinking and even how to regard things, that definitely became something that was ingrained in me.

Q: You went to SCAD and earned a BFA in illustration with a minor in printmaking and then earned your MFA in emerging media at UCF. Why stay in Orlando when many of your classmates moved to other places?
A: It’s a really great community, in that program, in AIGA Orlando, the Orlando chapter for professional design. It got me started in making those connections and getting to know the industry more.

Q: While some of your classmates were focusing on their professional careers, you had other concerns – applying for permanent resident status, so you can become a naturalized citizen.
A: My position, although it’s not by any means unique, it’s not the norm.
I was still under a student visa, so after I graduated, I had one year that I could get professional practice. Thankfully, I have lived on and off in Orlando, for the better part of 15 or 16 years, so I did a lot of work.
Then I decided to embark on applying for a green card. After I finished that year of working, I properly sat down and started putting that together. That was a two-year process. where I was kind of in a professional limbo.
Essentially, I had to prove the publications and clients and work and exhibitions or gallery shows that I was part of -- to prove that I’m worthy to be here. I have been super happy and super fortunate. People from way back in my Valencia days helped me. I had to get 20 letters of recommendations. I had to get letters from professors, clients and peers. But what’s so inspirational is my creative community at large. We were all paying our dues to the community and the community gave back to me. It was a super cool thing that we were able to show up for each other.