On Friday, February 10, 2023, all Valencia College campuses and locations will be closed for faculty and staff to participate in our annual, collegewide Learning Day. For general assistance, you can call 407-582-1507.

Valencia College is proud to have nationally recognized music faculty, all of whom are committed to providing the best guidance and education possible to its students. 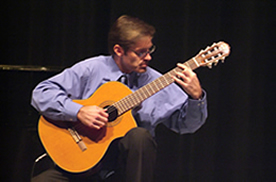 Troy Gifford currently serves as the Music Program Director at Valencia College.  He holds Bachelor of Music and Master of Arts degrees in Guitar Performance and Composition from Florida Atlantic University, and a Doctorate of Musical Arts in Composition from the University of Miami.  He is the recipient of numerous awards, including first place in the 1999 Guitar Foundation of America Composition Competition, the 2002 University of Miami Concerto Composition Competition, and the E.B. Griswold Award for Achievement in the Performing Arts.  His music has been performed worldwide and is published by Doberman-Yppan and Mel Bay Publications.  Before coming to Valencia, Dr. Gifford taught at the University of Miami, Florida Atlantic University, and Palm Beach Community College.

Born near Philadelphia, Pennsylvania, lyric baritone Alan Gerber studied choral conducting and voice with Jane Sheppard and Joy Vandever at West Chester University, where he received a Bachelor's degree in music education and a Master's degree in voice performance.  Mr. Gerber has performed as vocal soloist with several groups, including Pennsylvania Pro Musica and Sarum Singers of Philadelphia, Western Wind Vocal Ensemble, Musica Sacra and Amor Artis of New York City, Chorale Delaware of Wilmington, and Music Orlando, Orlando XIII, and The University of Central Florida Chorus and Orchestra. Mr. Gerber has been a frequent soloist in the Central Florida area in oratorio works such as Handel’s Messiah. Mr. Gerber's operatic credits include El Remondado in Carmen and Peppe in I Pagliacci with the Berks Grand Opera of Reading, Pa, and Lucano and Liberto in The Coronation of Poppea with the Orlando Opera Company. He has also appeared with the Orlando Opera Chorus in the productions of Rigoletto, La Traviata, Romeo et Juliette, Aida and Il Barbiere di Siviglia.  Mr. Gerber is the vocal/choral director at Valencia College, Orlando, Florida, where he conducts the Valencia Singers, the Contemporary Ensemble and the Early Music Ensemble. He co-founded and directed Bella Baroque, a local ensemble that performed Baroque vocal works and dances in authentic costumes. Mr. Gerber is also a pianist and violinist. Mr. Gerber is active in The National Association of Teachers of Singing (NATS), and is a former president of the Central Florida Chapter of this organization.  His students are frequently winners in the NATS auditions. 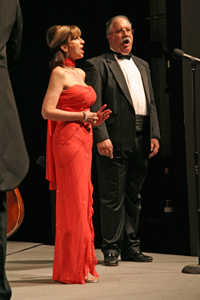 Soprano Carla DelVillaggio has been critically acclaimed for her superb interpretations of leading roles in operas such as Les Contes de Hoffmann, The Student Prince, La Boheme, Carmen, Die Fledermaus, and La Cenerentola, among others.  Ms. DelVillaggio grew up in the Orlando area and received her early training at the University of Central Florida.  She made her operatic debut while still in undergraduate school in an Orlando Opera Company production of The Merry Widow opposite Roberta Peters.  She went on to receive her Masters of Music degree with an Opera Specialization from SUNY-Binghamton, (NY).  Ms. DelVillaggio has appeared with the Baltimore Opera Company, Annapolis Opera Company, Opera Camerata of Washington, Summer Opera Theatre Company (D.C.) Tri-Cities Opera Company, Orlando Opera and the International Opera Workshop, among others.  Additionally, she has sung the soprano roles in such oratorio works as: Mozart’s Exsultate Jubilate, Laudate Dominum, and Mass in c Minor, Handel’s Messiah, Mendelssohn’s Elijah, Poulenc’s Gloria, Bach’s Magnificat, Vivaldi’s Gloria and Dvorak’s Te Deum.  In 2001, she had the honor of singing at a joint event for Czech, Slovak and American dignitaries, including the head of the Czech Senate and Madeleine Albright, former U.S. Secretary of State.  The following summer she made her European debut, in the Czech Republic, singing the title role in La Traviata.  She was the soprano soloist for the Messiah Choral Society’s performance of Handel’s Messiah at the Bob Carr Auditorium. Currently, she is an adjunct professor of voice on the faculties of both Valencia College (Valencia Faculty Webpage) and Rollins College. Ms. DelVillaggio teaches private voice instruction as well as Music Appreciation, Performance Lab and Voice Class.  She developed the first-ever Opera-Theatre Workshop at Valencia.  In addition to her responsibilities at Valencia, Ms DelVillaggio also enjoys singing jazz, and performs regularly as a Barbra Streisand impersonator. 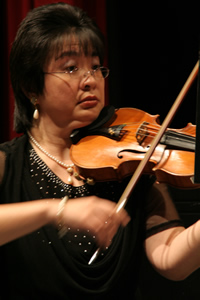 A graduate of the New England Conservatory of Music, the University of Kansas, and the Nanking College of Fine Arts, Ms. Brill has won numerous concerto competitions, including the Ohio Light Opera Concerto Competition in 1990, and has performed as a soloist with the Nanking Philharmonic Orchestra in Nanking, China, as well as the Ohio Light Opera Orchestra in Wooster, OH.  She has studied violin with Eric Rosenblith, Ben Sayevich, and Xue Sheng, as well as master classes in violin and chamber music with Claude Frank, Robert Vernon, Michelle Auclaire, Eugene Lehner, Colin Carr, Michael Haber, and Christopher Wellington. Born in Nanking, China, Ms. Brill holds a Bachelor of Music degree in violin performance from the Nanking College of Fine Arts, where after graduation, she joined the faculty of the College; later, she was accepted as a graduate student, with full scholarship, at the University of Kansas, where she received her Master of Music degree in violin performance.  At the University of Kansas, she also won the prestigious Katherine Nelson Award for outstanding performer.  Following her graduation from the University of Kansas, Ms. Brill went on to earn a Graduate Diploma in violin performance from the New England Conservatory of Music, in Boston.  While at the Conservatory, she performed with the New England Conservatory Symphony under Michael Tilson Thomas at Carnegie Hall. Ms. Brill enjoys teaching both in colleges and privately.  Currently, she is Adjunct Professor of Violin at Valencia College in Orlando, Florida, where she also has been directing the string ensemble of the college.  She joined the faculty of VCC in the fall of 2004.  Besides teaching, Ms. Brill has been very active in performing with professional orchestras, such as the New World Symphony Orchestra, the Kansas City Symphony Orchestra, and the Kansas City Chamber Orchestra.  Presently, she is a member of the Bach Festival Orchestra, and the Orlando Philharmonic Orchestra in Orlando, Florida; she also performs with the Brevard Symphony Orchestra in Melboune, Florida.