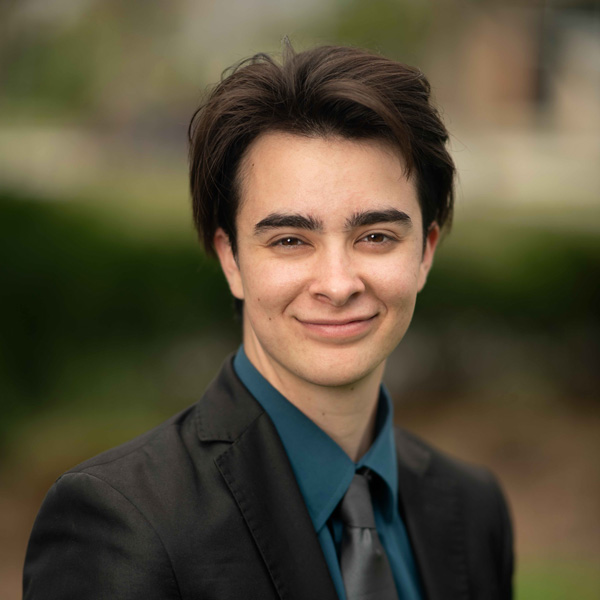 College seemed out of reach for Nikolai Wolfe until a postcard about Valencia's Honors College arrived in the mailbox. Today, this Valencia grad is studying at prestigious Williams College.

Like a lot of Valencia College students, Nikolai Wolfe’s educational path was not a straight one.

Originally from Orlando, Nikolai grew up in a very religious home and was home-schooled until the Wolfe family moved to Chicago when Nikolai was a junior in high school. The family lived in Chicago for a year, then moved to Tennessee. But when Nikolai’s grandfather died in the middle of senior year, Nikolai moved back to DeBary, Fla., to live with his grandmother.

After graduating from high school in Volusia County, Nikolai – who is non-binary — moved out of his grandmother’s house and, as he transitioned, bounced around, moving in with friends and worked a number of jobs.

Nikolai hoped to attend UCF but that wasn’t in the cards. “It just wasn’t possible,” Nikolai says. “I could barely afford rent and food, so I couldn’t pay for college too.”

Then one day, a postcard about Valencia’s Seneff Honors College arrived. “I thought, ‘This looks interesting,’ ” Nikolai says. “I already knew that was the only way I was going to be able to continue with school, so I applied.”

A month later, great news came. “I was accepted and I am undeniably blessed,” says Nikolai.

While taking classes at the Winter Park Campus, Nikolai impressed several professors, including humanities professor Paul Chapman. When finances got tight, Nikolai dropped out for a semester and reached out to Chapman to explain the situation. Because Nikolai wasn’t 24 years old yet – the age at which college students are no longer considered dependents -- the family income disqualified Nikolai for financial aid. Despite those hurdles, Chapman helped Nikolai navigate the financial aid process and qualify for financial aid.

At the Winter Park Campus, Nikolai also crossed paths with English professor Chris Borglum and the two hit it off immediately. “Like me, he likes to read all the time,” says Nikolai. Borglum repeatedly urged Nikolai to play on Valencia’s Brain Bowl team, which Borglum coaches.

“It took me four years, but finally, in my last semester, I decided to do it,” says Nikolai, “and I loved it!”

Being named a finalist for the college’s Distinguished Graduate in 2019 was an honor – and validation too. “I’m really proud of myself too,” Nikolai said at the time. I’ve been through a lot and I’ve endured. I think my professors are proud of me too.”

Best of all, however, have been the doors that Valencia opened for Nikolai. Today, Nikolai studying at Williams College, a small, exclusive liberal arts college in Williamstown, Mass., majoring in psychology and religion.

At Williams, the classes and academics are challenging but interesting. “I definitely enjoyed all of my classes all my professors have been amazing and they’re are very accessible. You can ask a professor to grab a cup of coffee with you,” says Nikolai. “Everyone’s super friendly. It’s a very small-town vibe.”

Because of Covid restrictions, Nikolai wasn’t allowed to leave campus for a year, staying in the dorm and taking classes remotely. Though Williams offered Nikolai and other students the opportunity to take a year off, Nikolai decided to enroll anyway. The college tested students twice a week and offered classes in both hybrid and online formats. “I think COVID would have been just as difficult anywhere else,” Nikolai says. “And I personally did not defer because I needed to live on campus.”

Nikolai’s financial aid pays for books, classes, housing and meals, but there were still challenges for a nontraditional student like Nikolai, who at 23, is older than most of the other dorm residents. But the benefits outweigh the downsides, so this summer, Nikolai is living on campus and doing an internship remotely, doing research on positive psychology for a California startup called Run the Moon.

Meanwhile, Nikolai is enjoying the surroundings.

“Williams is a lovely place all year round,” says Nikolai. “All the seasons are beautiful.”