Office of the President

Persistence, Progression, and Completion: A Review of Valencia’s Student Outcomes

Valencia has long held the  Big Idea that “Anyone can learn anything under the right conditions.” We believe that setting ambitious goals for student achievement and outcomes orients our institution toward implementing strategies and tactics that support students in pursuit of their goals and creating the conditions that all students need to achieve success. 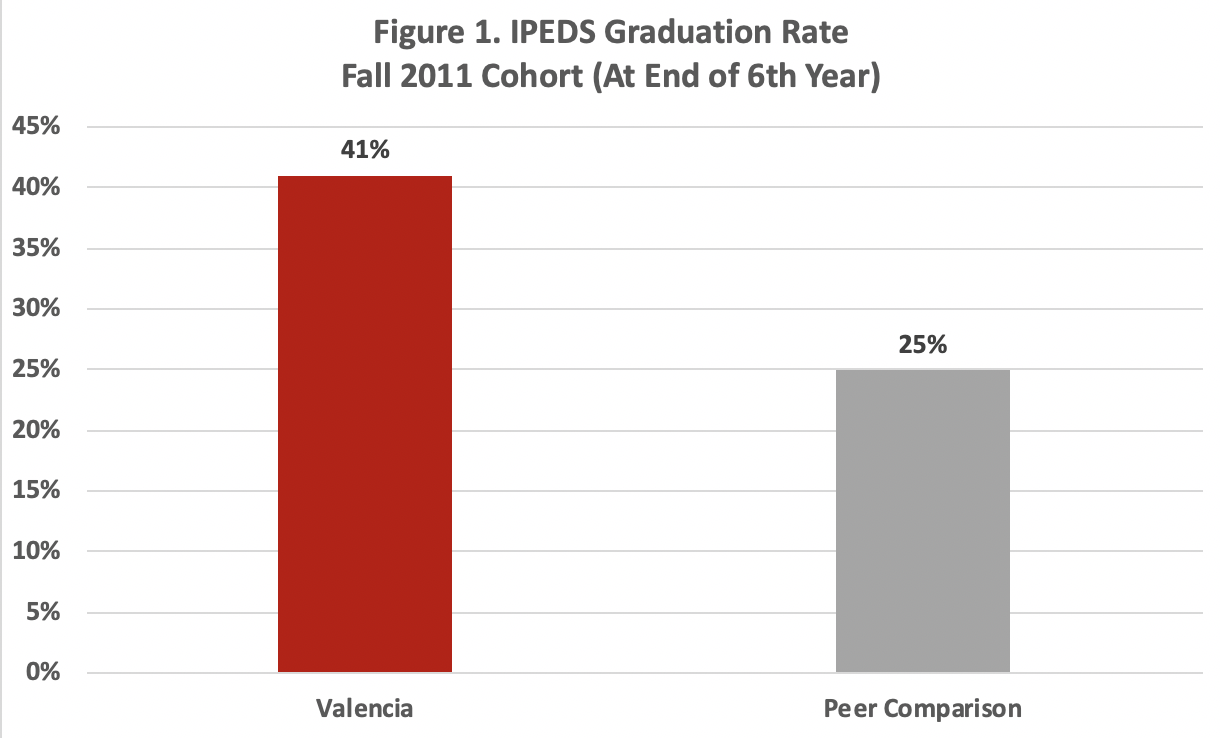 Changes in Graduation Rates Over Time 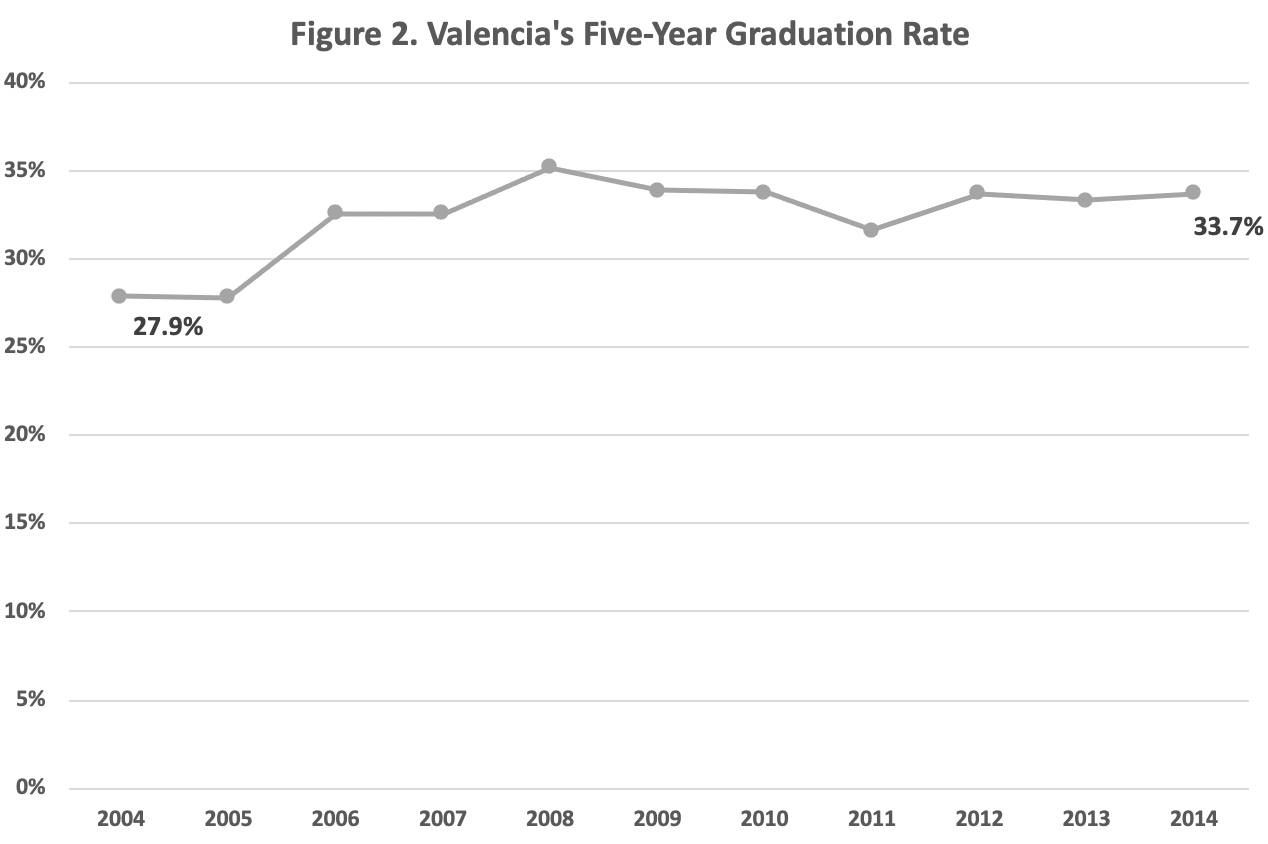 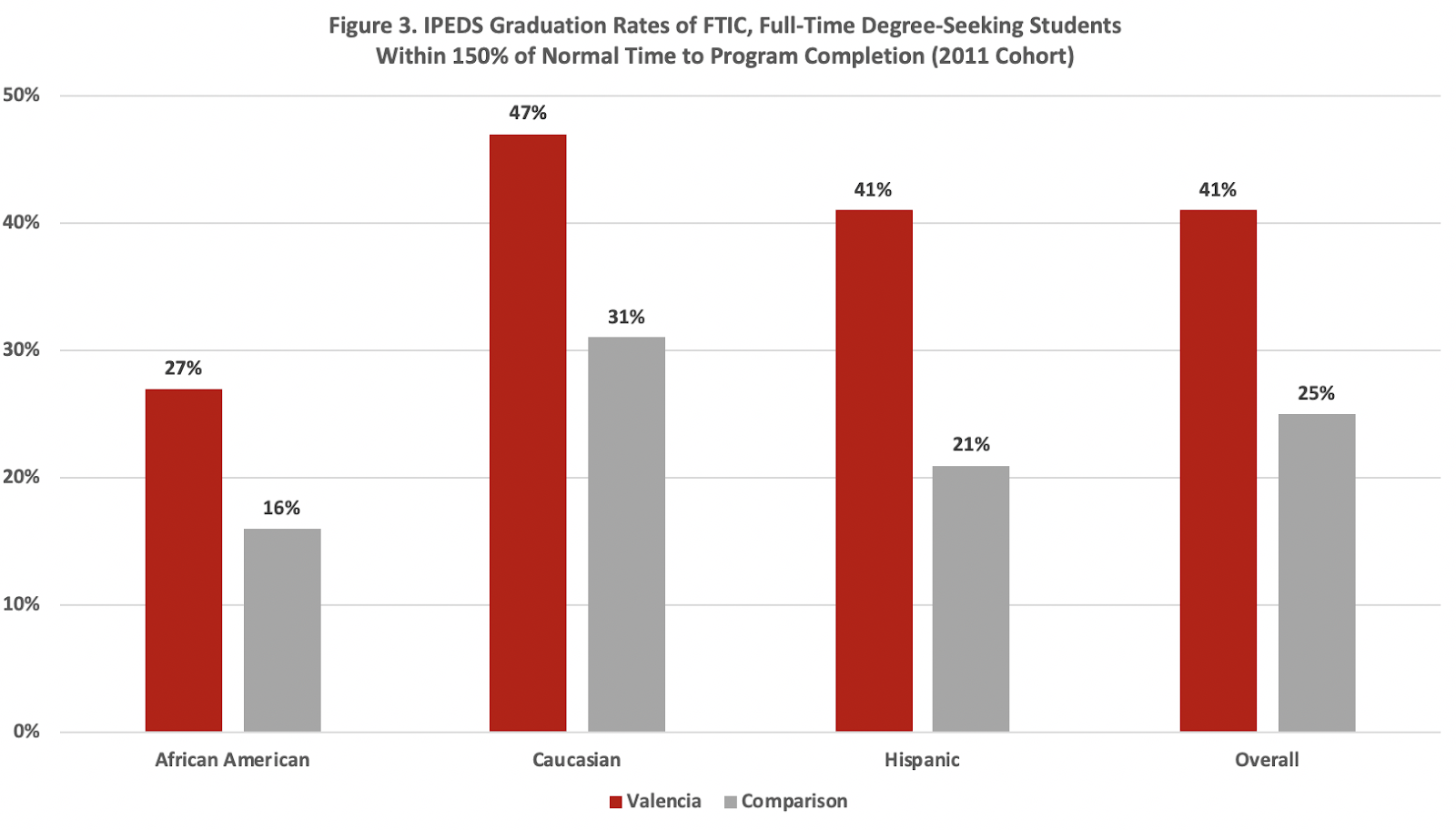 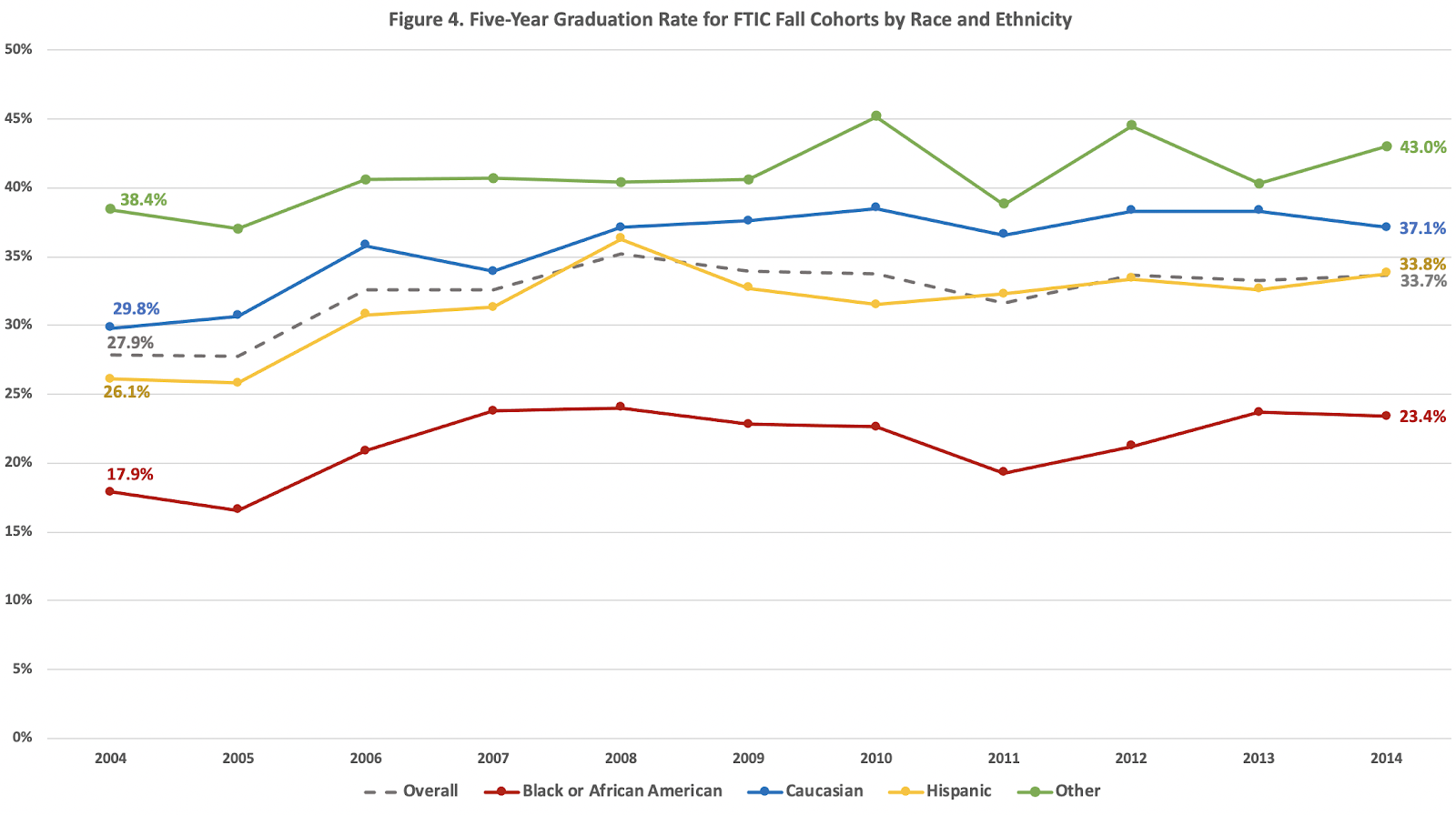 As we continue to work on creating the conditions at the college to improve the five-year graduation rate for students of all races and ethnicities, it is important to note that the number of associate degrees awarded overall per incoming cohort has doubled over the last ten years, and the number of associate degrees awarded to Black and Hispanic students has more than tripled over that same timeframe (see Figure 5). 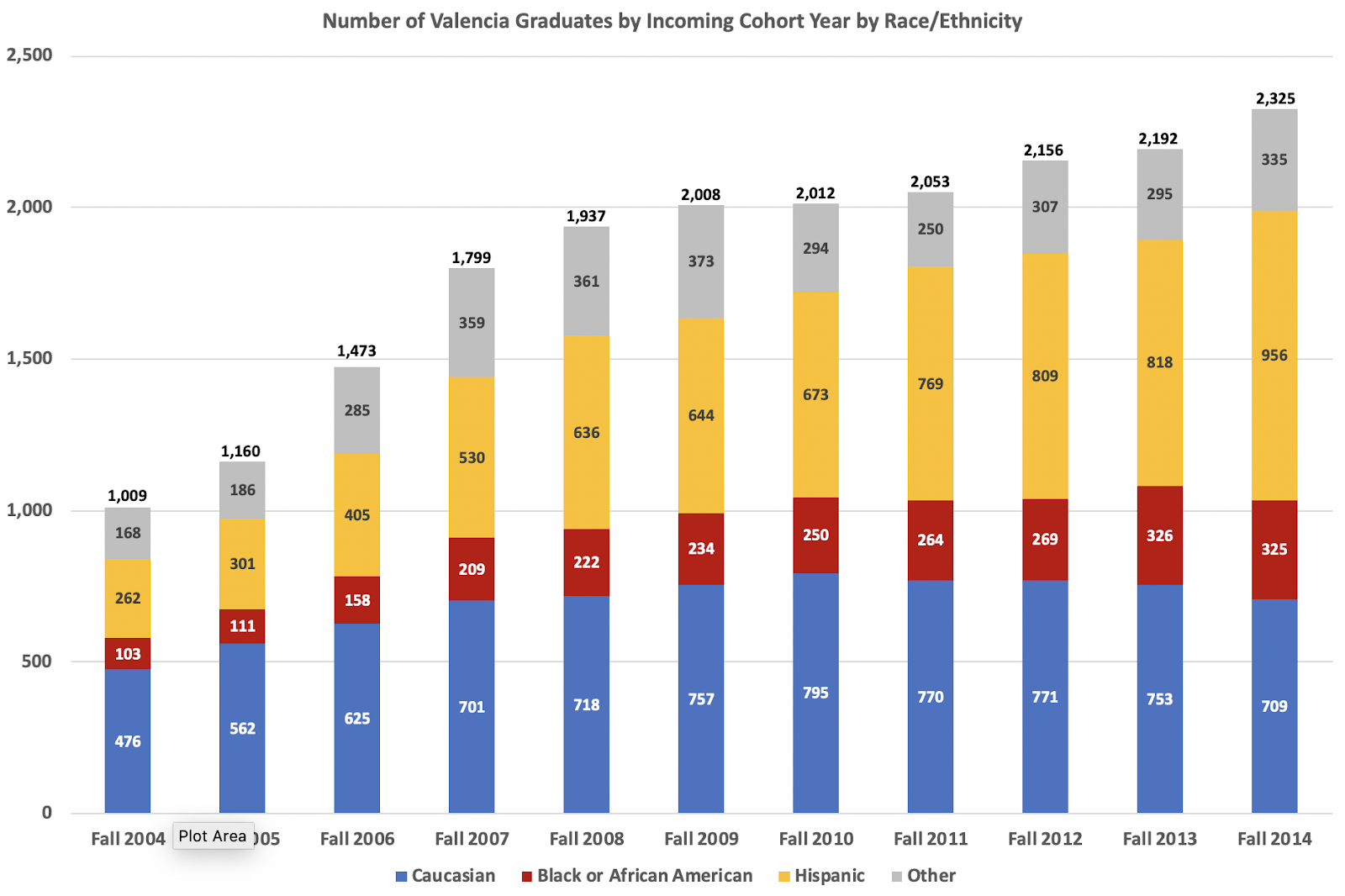 In 2018, our Faculty Council endorsed the following objectives related to student outcomes:

The most recent five-year graduation rate data are from the cohort of students that started at Valencia in Fall 2014 (as the 2019-20 academic year marks five years after they started college).  Generally, the graduation rate for Black and African American students has been on an upward trend since the 2011 cohort, while there has been little recent change in the graduation rates for Caucasian and Hispanic students (see Figure 6).

While the change needed to meet our graduation rate goal appears significant, relatively small changes in absolute numbers of students graduating will have a large impact on graduation rates.  For example, for the 2014 cohort to have reached our goal of 50% of students completing their goal of earning a degree from Valencia, 369 additional Black or African American graduates, 246 additional Caucasian graduates, and 459 additional Hispanic students would have had to have graduated. 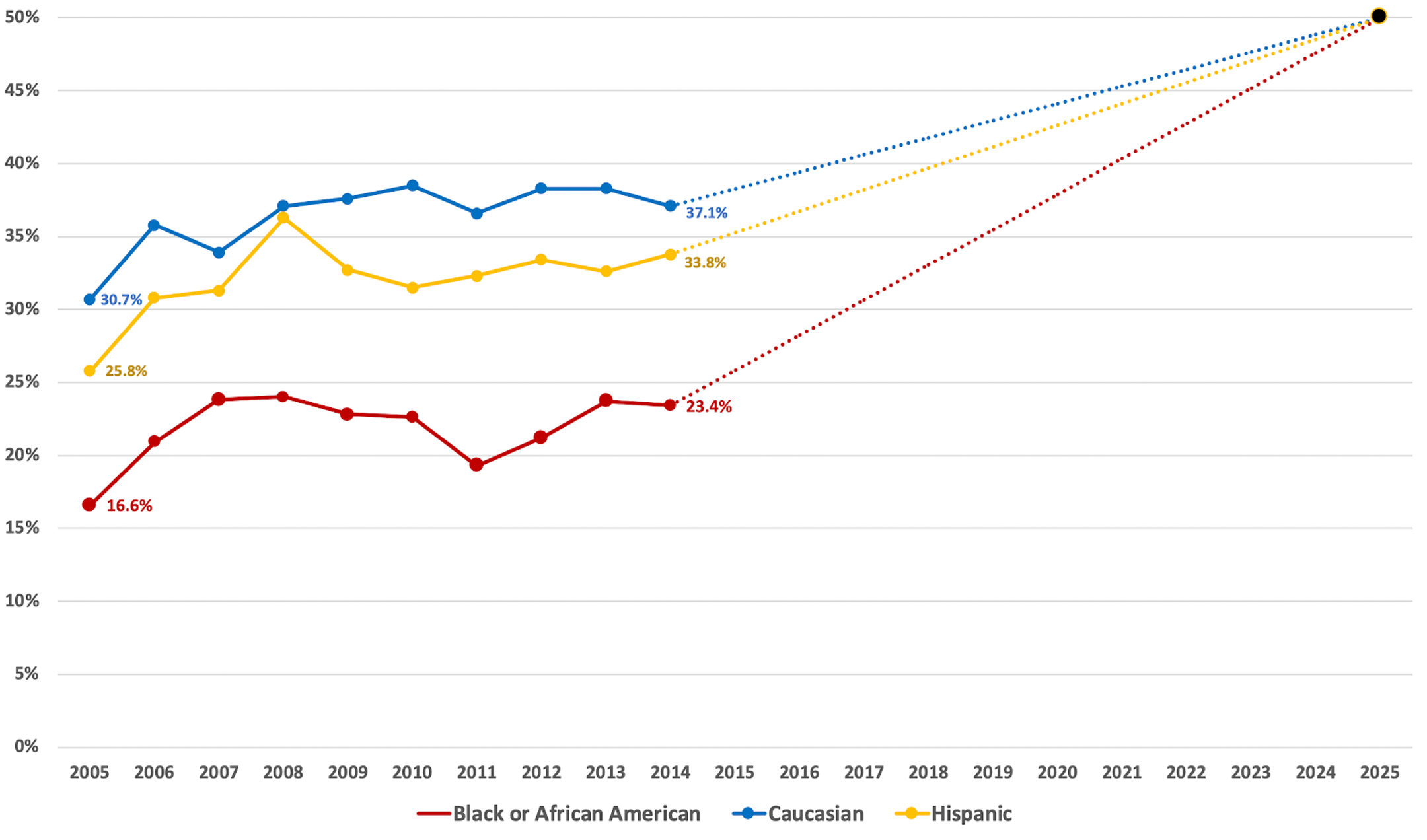 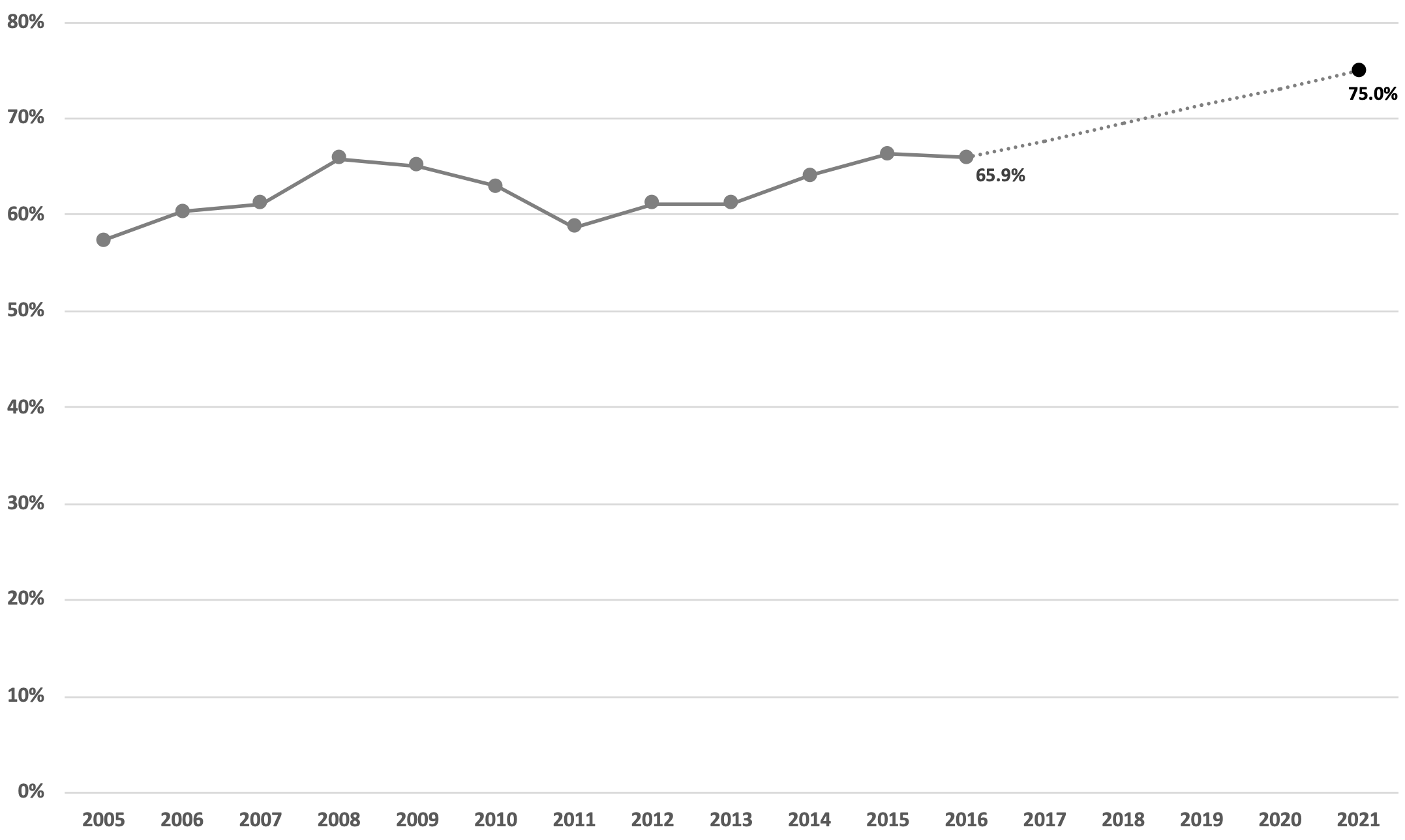 After a steady increase in the percentage of students successfully completing all five of their first five course attempts between 2005-2009, the percentage declined between 2010-2011 and has made only a modest recovery.  For the 2013 cohort, if 581 additional students would have successfully completed all of their first five course attempts, we would have reached our goal of 50%.

Figure 8. Percentage of Students Completing All Five of Their First Five Cohort (by Fall FTIC Cohort)

Goals #2 and #3 serve as leading indicators for our graduation rate goal.  While our most recent data show that more of our students have been completing fifteen college-level credits within two years, fewer students have been successful in all five of their first five course attempts. Given the strong correlation between success in first five and completion, this is a trend to which we should pay close attention. These data also suggest that the development of interventions to support the success of students who have unsuccessful course attempts early in their academic trajectories will be important as we work to raise the graduation rates of all students.