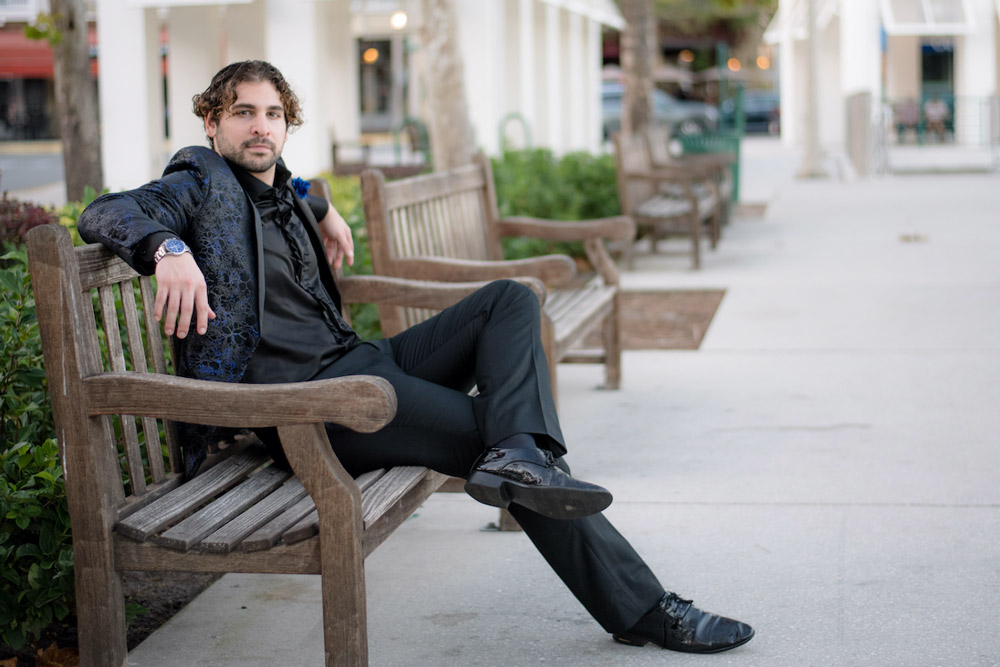 The Music Plays On: Valencia College Alum Continues His Rise in Opera Despite Global Pandemic

The hustle and bustle of Amsterdam played out behind Valencia College alum Jose Simerilla Romero as several masked figures walked around him, huddled in light jackets as the summer air slipped into chilly fall temperatures in the evening. During this short reprieve in his busy rehearsal schedule for the Dutch National Opera, Jose reflected on the past year, which has been filled with twists and turns for the opera world, as the entertainment industry was rocked by COVID-19.

But little did Jose know what 2020 would hold, in spite of a chaotic audition in New York, filled with flat tires and stolen luggage, followed by a historical global pandemic, nothing could stand in the way of him and the next big step in his career as an opera tenor.

Out of breath and racing through New York City, Jose knew that only a few minutes of performance time stood between him and an opportunity to share his talent internationally with one of the top operatic companies in the world.

Although hesitant at first about moving overseas after a recent bout of travel for performances, a friend convinced Jose to audition for a chance to join an opera company in Berlin, Munich or Torino (Italy) for the 2020-2021 season. After a quick discussion, Jose decided to give it a shot and hopped on a plane from his hometown in Florida and hustled to New York in the middle of January.

However, he realized quickly upon his arrival that the odds were against him. His performance shoes were stolen along with his luggage, and with no time to spare, he threw on his sneakers, hailed an Uber, and made his way across town to the audition. But with the way his journey had been unfurling, Jose’s day was only about to get bumpier, and before he knew it, his Uber ride blew out a tire.

In his dress clothes and sneakers, he got out of the car and helped his driver change the tire, chilling his voice and leaving him in an undesirably cold environment on the side of the road in New York just moments before his big audition. With frayed nerves, a cold voice and no dress shoes, Jose finally arrived at the venue with just enough time to run through the doors and be called to the stage.

“I was in a low-confidence place before the audition,” Jose said. “My shoes were stolen … I was dirty, sweaty, my voice wasn’t warm, and I had to run up three flights of stairs to get to the audition. I was a mess.”

But as he got on stage and gave it his all, he began to feel that something may have finally begun to go right. A few moments into his audition song, Jose noticed that someone had taken out her phone out to record his performance.

Luckily, he had one more chance to dazzle his audience. After a few moments of reprieve backstage, and the support of an unknown “angel” who made him tea and helped curb his anxiety, he took the stage once again.

After that, it was over.

“If you give yourself the chance to go out there and perform, the worst thing they can do is say no,” Jose said. “There are a lot of singers out there, just like there are several brands, and sometimes people won’t like your product. You can’t take it personally.”

Just as he was moving on and making other plans, a call finally came, but not from Berlin, Munich or Torino. Instead, there was a representative from a fourth company in the audience that day in New York, and, as it turned out, that rep, from the Dutch National Opera, loved him.

Beginning of a Career

Born in Argentina and living in Spain before moving to the U.S. at the age of six, Jose was exposed to opera early. With the voices of European greats such as Plácido Domingo and Luciano Pavarotti filling his home, Jose’s musical talents were driven by nothing more than a passion for singing and the joy of opera that his father instilled in him. Although he seemed destined to land in an artistic career, his goal while attending Valencia College as a dual enrollment student was to become a graphic designer.

“I wasn’t sure what I wanted to do, but I always played piano by ear and would sing for fun,” Jose said. “Valencia was kind of a launching pad. Young singers come in and see if it’s something they want to do, and that’s where I got my start.”

It was at Valencia that Jose crossed paths with adjunct music professor Juan Martinez. Martinez, along with a few other professors within the music department, were some of the first people outside of Jose’s supportive family to recognize his talent. The Valencia instructors soon realized there was so much more to Jose than just his voice, and they took notice of the spark and ambition that lived within him.

“He understood very early that to be successful in this career you have to not only be a good singer, you need to be a good musician and a good actor,” Martinez said. “He was born with this incredible voice and all I did was teach him to sing.”

Throughout his studies at Valencia, Jose would learn to read music, learn his singing scales and begin to master performing in five languages: English, Italian, German, French and Spanish.

“I challenged him and demanded more of him because I knew he would go far,” Martinez recalled. “There’s a little breath of fresh air when you plant this seed and water it and see the fruit grow … I’m proud that I could contribute even a small fraction to his growth and his career.”

Building on the foundation of his musical education roots from Valencia, Jose decided to expand upon his learning and pursued his bachelor’s degree at Stetson University. While there, the opportunity of a lifetime happened, and one of the legendary voices that had once filled his childhood home was personally requesting that he audition for a coveted position in a young artists program across the country.

Plácido Domingo had recognized Jose’s talent from his own “Operalia”, an international opera competition, and asked his nephew tp call Jose personally to convince him to audition for the Domingo-Colburn-Stein Young Artists Residency Program at the LA Opera. Soon he was faced with a tough decision: Should he continue his education in person at Stetson University, or juggle the program and complete his degree while living in Los Angeles?

“I was just drooling,” Jose recalled. “I’m just this 20-year-old kid who taught himself how to sing through his dad’s CDs and I got this position alongside people who have completed their master’s degrees.”

The conservatory opportunity was something that even veteran opera singers would envy, but halfway into the program Jose realized that being a “rising star” within the community placed him directly into a spotlight – one he believed he was “too young and inexperienced” to handle at the time.

The pressure mounted on the young performer halfway into the three-year program, and not wanting to create a bad impression in the group that had welcomed him so warmly, he decided to bow out and focus on building his career until he felt that he was ready to dive back into such an intense role.

But stepping out of the spotlight didn’t mean Jose was taking a backseat in the world of opera. On the contrary, since then, he has worked to fine tune his skills elsewhere, and his voice has taken him around the globe. In the past few years, Jose has performed everywhere from Aspen, Colo., to Vienna, Austria, and in renowned venues such as Carnegie Hall and the Lincoln Center in New York. Looking back on it all, every decision led to the next as they guided him to his current position of a year-long residency in Amsterdam.

The Show Must Go On

The Dutch National Opera Studio, the young artists program that Jose has been accepted into in Amsterdam, started two years ago in 2018. The group is led by internationally renowned soprano Rosemary Joshua, who serves as the artistic leader.

Jose is one of eight international talents currently in the Studio program, working toward establishing his career and growing as a performer despite COVID-19 and the ruthless toll it has taken on performing arts.

Funded partially by a scholarship from the New York Opera Foundation to continue his studies with the Dutch National Opera Studio, Jose acknowledged that the program is intense, but will fill his schedule with plenty of time to hone his craft over the next year.

“The money is the weakest piece,” Jose said. “The greatest reward out of these auditions, performances and opportunities is the connection you get with others in the industry.”

Jose would be the first to tell you that, as with all careers in entertainment, there will be highs and lows along the way. However, no one was able to predict the harsh impact of a global pandemic that crept up on the industry. As COVID-19 continues to eviscerate the arts and entertainment industry, Jose has managed to find a lucky break in the midst of the pandemic with his position at the Studio.

“The coronavirus cancelled everything, and a lot of my friends are in a position of not knowing what to do, wondering how they’ll pay their bills,” Jose said. “I count my blessings every day that I have this opportunity.”