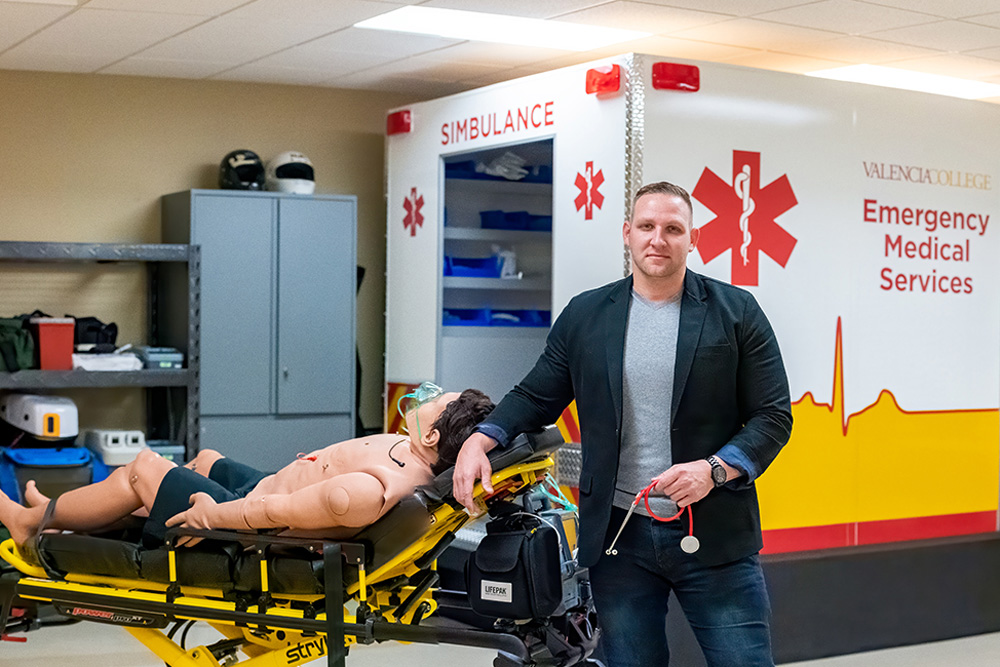 From firefighter to surgical resident, Warren Evans credits Valencia College for sparking his love for learning.

For a young Warren Evans, the path to a higher education may have seemed stunted by his lack of a high school diploma, but he knew in his heart that he was destined for public service. Growing up in Pine Hills and the middle child out of seven, Warren’s drive to help people led him to become a firefighter with the city of Apopka in 2007 – the first of his many roles as a first responder and healthcare worker.

Now a graduate from Valencia College, Warren has recently completed his medical school education and is taking the next step on his way to becoming a surgeon and educator in the medical field. After finishing his education at the Edward Via College of Osteopathic Medicine, he has been selected for a competitive surgical residency program in the Spartanburg Regional Healthcare System in South Carolina, a Level I trauma center. Because less than 10% of all medical students nationwide land a coveted position in a surgical residency, Warren says that he feels “beyond blessed to have this opportunity.”

But Warren will be the first to tell you that before he even knew where his journey would take him, Valencia College was his gateway – or not only his education, but for his professional career.

“Valencia gave me a shot when I didn’t have anywhere else to go,” he said. “Especially in the beginning, [Valencia] helped me realize what I was capable of doing…They provided me with the opportunity to come to school, and since that moment, everyone I came into contact with here was so incredibly encouraging.”

It was his first step at Valencia College after getting his GED that eventually led to the many leaps and bounds that he would end up taking in his academic and professional careers. Once he set his mind to expanding upon his firefighter experience and medical training, he turned to Valencia College once again to complete his associate of arts (general studies) and associate of science (emergency medicine) degrees.

Determined to go to medical school, he focused his coursework on areas that would enhance his skillset, and his professors at Valencia College inspired him to continue to reach each goal and milestone he created for himself.

“Regardless of the class, when I told them I was pre-med, it was unbelievable. Everybody was extremely supportive and they helped me realize what my potential was,” Warren said. “I don’t think that’s something that’s ubiquitous amongst all of the institutions here.”

Due to the lasting impact of his experience at Valencia, Warren continues to make his rounds at Valencia College, returning during his summer breaks for the past five years as an adjunct professor in the very program that opened his world up to the opportunities he would pursue and excel at.

Even as he heads into a career in medicine, Warrens plans to become an educator in the medical field, with his desire to create a similar teaching environment stemming from his time at Valencia College and the relationships he built as a student. One of the mentors who still stands out to Warren nearly 12 years later is Lynda Wilson, a professor of biology and medical terminology who taught one of his very first college classes.

“She’s so incredibly passionate about what she teaches, and that has had a lasting effect. She was inspiring to me. It was my first college class ever and it was so scary, but I got an A,” he said. “If I can even change one person’s mind of what they think they’re capable of, that is my piece to give back and contribute in the same way that my professors contributed to me.”