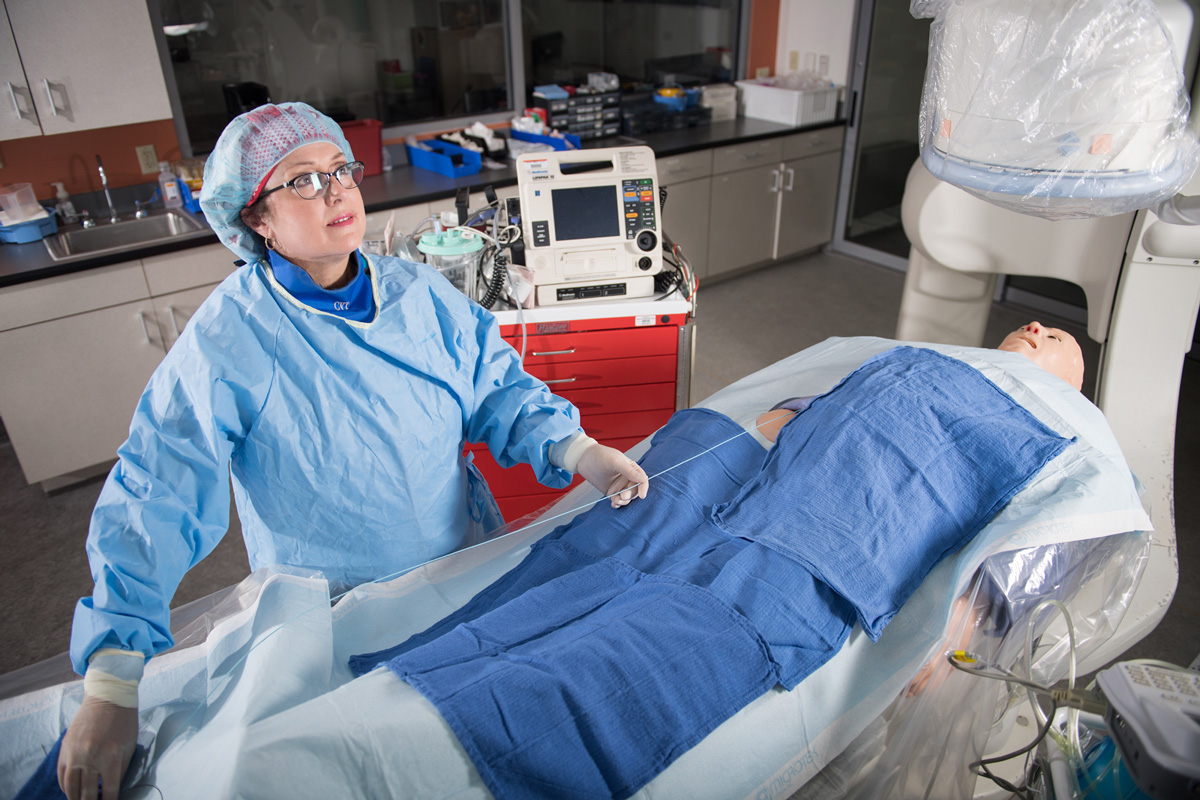 Angela Murphy spent most of her adult life working in a dental office, making little more than minimum wage. But when she decided to go to college, she discovered it wasn’t too late to live her dreams.

In 2012, Angela Murphy found herself at a dead-end, having worked as an office clerk for decades. Now, with both an A.A and A.S. degree from Valencia College, she is a successful catheterization lab technician, a profession which boasts an above-average growth potential and a median salary of $54,880, according to the U.S. Bureau of Labor Statistics.

But those are just the facts. We thought we’d leave the storytelling to Angela, since she says it best: it’s never too late to live your dream.

My name is Angela and this is my story of how Valencia and the Seneff Honor’s College made it possible for me to live my dream. I am a non-traditional student. In fact, I am way beyond that. I am 56 years old now. I never had the opportunity to have a college degree, because my family was very poor, and as time went by, I raised my own family. I started a career at 20 years old, however, working in a dental office, over the years working my way into every position you can be in a medical office. My specialty was medical billing, collections, and appeals. I was working in a medical office with 30 years of experience, and getting paid $11/hour. I wasn’t happy doing the job anymore. I wanted to help people, but I was still not clinical. That is what I always wanted.

I quit my job and started investigating how to become a student. I looked at a lot of various kinds of schools, but Valencia had everything I wanted. I enrolled and was accepted, starting classes in the summer of 2012. I was 51 years old and terrified. Then at the end of the summer term I was asked to attend a meeting. Now, one thing I have never done at Valencia is turn down any opportunity. So, I went. I found out about the Seneff Honor’s College and scholarships that were available to me.

I took the opportunity and applied. I was accepted and started in the fall. I completed my required 24 credits at the Seneff Honor’s College, while working on my pre-requisites for the Cardiovascular Technology program. Along the way I went to England, on a Study Abroad trip. I went to Washington, DC on a study trip. My research won an award at Florida Honor’s Council, and I was asked to attend and present that research. I was referred, by my professor, to be Editor of the Phoenix magazine. During my tenure as Editor-In-Chief, the magazine won top prizes in the state, one of which was first place in Editing. I wrote a non-fiction story, “Glimpse of Strength,” about my grandmother giving birth to my Father in Arkansas. It won first place in the state. I won student of the month, while maintaining a 4.0 GPA.

In the summer of 2014, I was accepted into the Cardiovascular Program, and the time just flew by. I took each semester as it came. I gave up my income for my family, but my son told me not to worry. He said that I would make it all back my first year out of school, and he was right!

I worked harder than I have ever worked in my entire life, and as of today, I have completed my A.S. in Cardiovascular Technology with honors and my A.A. in General Studies with honors. With my BS Cardiopulmonary Sciences in process, I will graduate with my third degree in one more year. I took my registry exam, and I am now an RCIS (Registered Cardiovascular Invasive Specialist). I work at Osceola Regional Medical Center in the Cath Lab. Recently, I was offered a second (per-diem) position at Celebration Hospital in their Cath Lab.

Recently, I attended the Evening of Distinction for the Seneff Honor’s College. Mr. Seneff was there, as well as Dr. Sandy Shugart along with faculty and staff of Valencia and many other amazing, inspiring, outstanding students. I was awarded the highest honor “Seneff Honor’s College Scholar”. I also was given a moment to tell all the things that Valencia and the Seneff Honor’s college have made possible for me. Dr. Shugart and Mr. Seneff both shook my hand, and told me they were proud of me.

Livin’ the Dream! That’s what I am doing every day and all it took was a commitment to keep on going. Yes, there were plenty of opportunities to quit or postpone the next semester, but I did not. I kept going even when I was sure that I had failed the semester, but I worked even harder and I did not.

I hope you know that it is never too late to live your dream, and you are never too old, either.