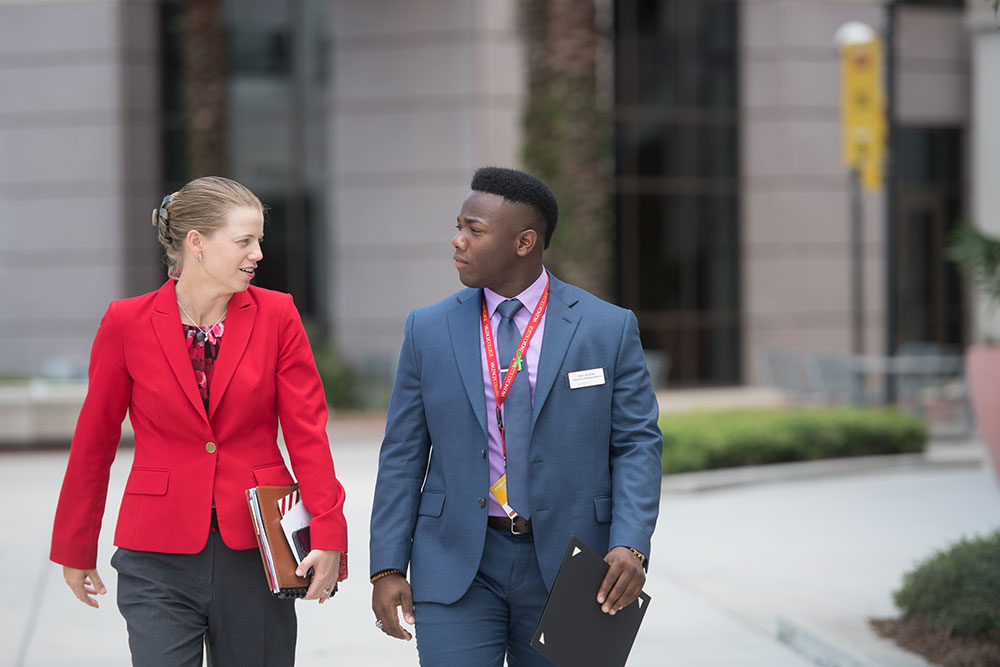 From struggling as a math student to a bachelor's degree graduate on a management track, Marc Aristide credits Valencia's small classes and personal attention with helping him succeed.

At Valencia’s Osceola Campus, Marc Aristide, a first-generation Haitian-American student from St. Cloud, was a familiar face while he was earning his associate’s degree.

On any given day, Aristide could be seen setting up for a student development event and serving as master of ceremonies; donning the red jacket of Valencia Ambassadors to show newcomers around campus; or huddled with peers in the group study rooms in the library and learning centers. Off campus, Aristide juggled two part-time jobs at Publix and Chick-fil-A.

From the outset, Aristide recognized that math wasn’t his strong suit and chose to start in developmental math classes. Fresh out of high school, he enrolled in the summer semester – a requirement to earn the Bridges to Success scholarship. It was a decision that would set him up for success and, ultimately, open the door for a passing grade in business calculus and an A in statistics.

While Aristide’s perseverance played a role, he attributes much of his success to the resources available on campus – particularly the Math Depot at Osceola Campus.

“I was able to get help from the people there and use the rooms available to students, free of cost,” says Aristide who quickly formed a study group with his classmates from developmental math. “I kid you not, we would be in there from the time that our class ends at 10 a.m., sometimes, until the Math Depot would close at 8 p.m. I’m not going to say that we were working and so focused the entire time, but it provided a space that we otherwise would not have had. We were able to answer questions for each other, we were able to help each other.”

Although Aristide originally planned on a career as a pharmacist – which would require a heavy course load filled with biology and chemistry – Aristide struggled in his first semester and decided to re-evaluate his options. Interested in Marketing, he consulted Valencia’s Career Center and some of his professors, and decided to focus on earning a degree in business administration.

The new path allowed him to become more active on campus – another factor which he believes contributed to his success.

“I really wanted to become a Valencia Student Ambassador when I was in high school and the ambassadors visited my school,” he recalls. So, when he got the chance to become one he leaped at it. Along the way, he developed leadership skills and got to lead a tour of the campus for the U.S. Secretary of Education’s 2017 visit. In spring 2018, he was named Osceola Campus President for a Day, during which he shadowed Dr. Kathleen Plinske, the campus president at the time.

In class and on campus, he received so much personal attention that, when Valencia announced it would start offering a Bachelor’s of Applied Science in Business and Organizational Leadership (BASBOL) in 2018, Aristide eagerly signed up. 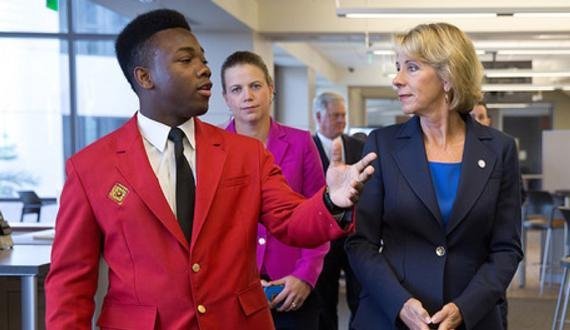 Now, after graduating with his bachelor’s degree in July 2020, Aristide knows he made the right choice. “I knew the resources that I would get at Valencia would be very helpful, and the classes would be small and I’d get one-on-one time with my professor,” he says.

“But one of the things I’ll really take away from this is the responsiveness of the professors. When you need help with something, they’re very quick to respond,” says Aristide. “The classes are so small, they’re able to get back to you quickly.”

Aristide started the program before the COVID pandemic struck, so he took many of his classes in person – even though the BASBOL program is also available online.

“I’m a pretty social person. I like to be face to face,” he says. “And because I started working full time near the end of the degree, I was already taking my final classes online.”

The pandemic also forced him to re-evaluate his career path. After graduation, he’d planned to leave Publix – where he’d worked part-time since high school – but Aristide realized that the Lakeland-based company was growing and providing career opportunities at a time when many other companies weren’t.

“The pandemic solidified my decision to stay with Publix,” says Aristide, 24, who has been promoted twice since January 2020. Now, as a team leader, he uses the tools he learned at Valencia every day. “I am so glad I got the degree because management is not easy; I have been able to apply what I’ve learned at Valencia.”

And, if he ever decides to dabble in Marketing or other business fields, he still can. “Outside of the retail part of Publix, there’s a lot of opportunity in the corporate side of Publix,” he says. “This degree is a great foundation for whatever company I go to.”