Growing up in Puerto Rico, Nadia Vidal zeroed in on her life’s goal quickly.

Surrounded by seas and beaches, she knew early on that she wanted to become a marine biologist – and focus on protecting the oceans and marine life from pollution.

Her interest in the work was cemented when, as a high school student, she volunteered at Las Cabezas de San Juan Nature Reserve. There, she spent more than 160 hours documenting native species of plants and animals in the park, counted and documented nests of invasive iguanas that posed a threat to the native animals and worked in greenhouses dedicated to native plants and trees.

In Puerto Rico, high school students must complete 40 hours of community service working for conservation organizations – so Nadia signed up with an organization dedicated to a nature preserve at a nearby beach. “I ended up liking it so much that that’s what I decided to do as a career,” said Nadia, who completed more than 160 volunteer hours, even though she was only required to complete 40. “My original plan was to study conservation and get a job at that nature reserve.”

However, after Hurricane Maria devastated Puerto Rico, Nadia began to rethink her plans. She was entering her senior year in high school when the storm hit and she found herself in limbo, waiting for news about high schools and colleges reopening.

“About three months after Hurricane Maria, I was getting kind of desperate because it was my senior year and I hadn’t heard anything from my school about when they were going to reopen. At this point, it was almost December,” she recalls. Although Nadia lived with her mom in Puerto Rico, her father served in the U.S. Coast Guard and was stationed in Louisiana at the time. He offered her the chance to attend high school in Louisiana, and, after much debate, Nadia decided to move to Louisiana and complete high school.

She was saddened by the decision – especially when she learned later that her high school in Puerto Rico was on the verge of reopening. To make the decision harder, her school in Puerto Rico specialized in math and science. “I was the first generation that went to that school, and it was really competitive .. I was really proud that I got into that school… and then Hurricane Maria, and I thought, Oh shoot.”

While in Louisiana, Nadia and her mother learned that Valencia College was offering in-state tuition prices for Puerto Ricans who had fled Hurricane Maria.  And, because her interest was in the ocean and marine biology, she thought Florida, with its large Puerto Rican population and miles of coastline – sounded like the right place for her.

So after graduating from high school in Louisiana, Nadia and her mom moved to Orlando.

“Although I didn’t get to graduate the way that I imagined I was going to, I don’t regret coming over here (to the mainland) because I had so many opportunities at Valencia,” she says.

At Valencia, Nadia began studying biology and volunteered on beach cleanups with the Sea Turtle Preservation Society in Cocoa Beach.  She also joined other Valencia students on a study abroad trip to Greece, where she and her team participated in turtle conservation efforts and relocating sea turtle nests.

“In Greece, we would monitor the beaches to see if one of the sea turtles had nested. We got lucky and got to relocate one of the nests, because it would have been flooded when the tide came in. So we had the experience of actually saving a nest,” she says.

“I got lucky too because I was one of the volunteers who got to help with the relocation. The eggs have to be at the correct temperature or they won’t hatch. So you have to be gentle.. they look like ping pong balls but they’re very squishy. They’re very delicate.”

The experience cemented her interest in ocean conservation, so as she prepared to graduate from Valencia, one of her friends encouraged her to apply for a Jose Serrano scholarship with the National Oceanic and Atmospheric Administration.  The scholarship, which is awarded to about 20 college students each year, is a two-year opportunity for students at minority-serving institutions. 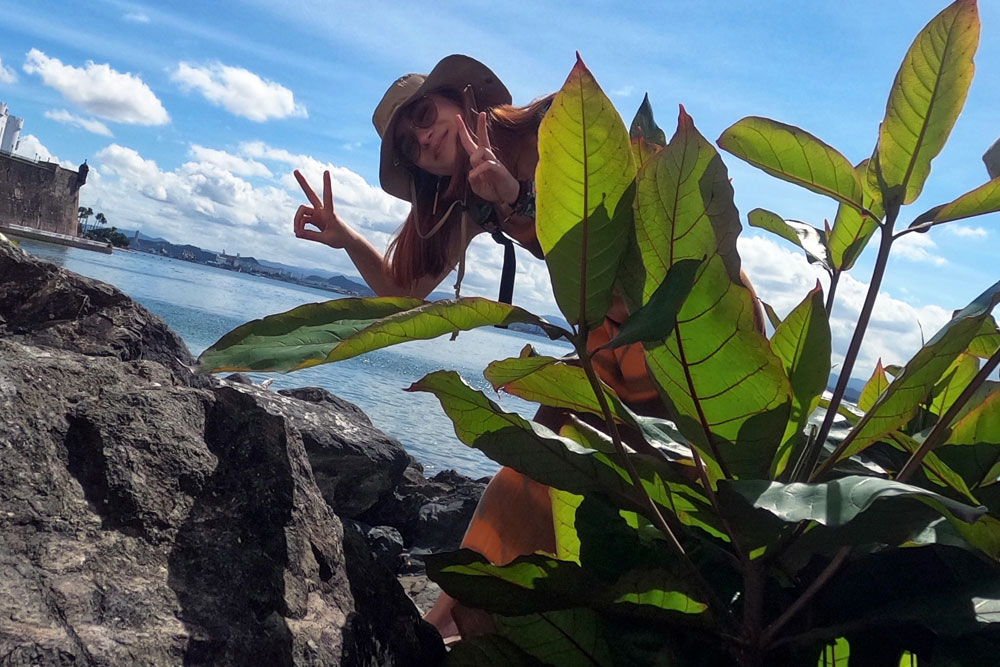 Nadia, who had already completed her studies at Valencia and had finished her capstone honors project – on how COVID-19 and the use of disposable plastics accelerated ocean pollution around the world -- almost waited too late to apply.

But urged by a friend, she finally got the required paperwork and, as evening approached, she sat down, drank two Red Bulls and cranked out the required essay. About a month later, Nadia learned that she’d landed the Serrano scholarship and had a choice of 40 projects that she could work on.

“I chose a few of them, but none of them were kind of what I wanted. And then randomly, the person in charge of the interns emailed me back -- and sent me an intern introduction with these 2 doctors,” Nadia said. “I didn’t know what the project was about. But it turns out that the project was with a NOAA oceanographer.. and the other professor works with sea turtles… and it was actually a sea turtle project with UCF.”

The project team is studying how climate change is impacting loggerhead turtle habitats and nesting populations. “What I’ll be doing is looking at climate models and assessing how the temperature and precipitation is affecting loggerhead nests at a beach in Florida,” Nadia said.

Why does the temperature matter? Because the sea turtles require the ocean water to be a certain temperature – and at higher temperatures, they can’t produce eggs. Or, Nadia says, the hatchlings will all be females and they won’t be able to reproduce.

It’s an exciting internship and Nadia – who is now considering a career as an oceanographer – is excited that she gets two years to work with the NOAA team.

“I am very excited about this opportunity,” she says. “Looking back, I made this impulsive decision to leave Puerto Rico and come to the States. I originally had a plan, I had everything set (for college) but Hurricane Maria changed everything.  For me, it was a positive. I know that’s not the case for many people. But for me, I’m glad I got that push to come to the States and I’m glad that I got to come to Valencia College because I got to apply to the scholarship of my dreams because Valencia College is a minority-serving institution.”