Valencia College campuses are closed on Friday, July 1 through Independence Day, July 4. Please reach out to us @ 407-582-1507 from 8 a.m. to midnight for assistance during this time.

Florida may be known for producing Olympic swimmers and, now, Olympic speed skaters. But in the next summer Olympics – set for Paris in 2024 – look for another Central Florida product: boxer Omari Jones.

Jones, a 19-year-old Valencia College student, is currently training with USA Boxing in the Olympic training center in Colorado – that is, when he’s not touring the world, participating in boxing tournaments.

“There are a lot of tournaments coming up for me to get Olympic points, for me to get in the best position for Olympic seeding,” says Omari. “If all goes well, I’ll be in the Olympics before you know it.”

Omari got started in boxing at age 8, after starting karate lessons at age 4. That physical contact, combined with his own sense of discipline, proved to be a winning combination.

“With boxing you depend on yourself, you don’t have to worry about a teammate,” he says. “If you put in the work, you will reap the benefits. And that’s what drove me.”

Part of the fun of boxing, he says, is “putting on a show.” Showing everyone what he can do in the ring is a great feeling – and, he says, the most exciting thing about boxing.

Here in Orlando, he works out with his coach, Jason Galarza, who owns the School of Hard Knocks boxing gym in Casselberry.  When he’s not in Colorado, he works out there, jumping rope, working the heavy bag, the speed bag and sparring with his strength and conditioning coach, Craig Duncan.

Omari moved to Galarza’s gym after his previous coach closed his gym. Now Galarza has mapped out a path for Omari – and if everything works out, it leads straight to Paris.

That path became clearer last spring, when Omari won gold at the U.S. Nationals Elite Boxing Championship in Shreveport, La., in the welterweight division.
“After that tournament, that opened up the door for me a lot. I ended up going to two training camps with the Olympians before they took off for Tokyo. I came to camp again, around September to head out to Serbia,” he says. There, at his first international tournament, he won the silver medal.

Since then, he has shuttled between Orlando and the Colorado Springs training camp – while keeping up his college studies. Omari, who began taking classes at Valencia while at Edgewater High School, says he’s thankful that Valencia College provides him with the option of taking his classes online. 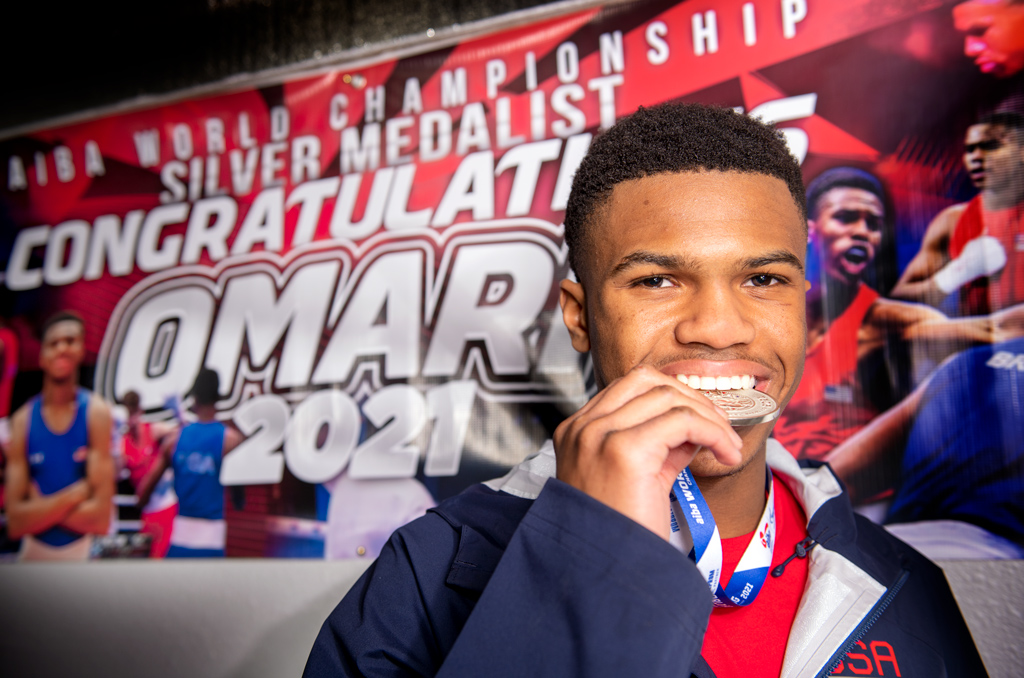 Valencia College student Omari Jones preps for the 2024 Summer Olympics by biting down on the silver medal he won at the 2021 AIBA World Boxing Championships held in Belgrade, Serbia in 2021.

“I decided, instead of going to another college, I could stay at home and train and study,” he says. “I decided to go to Valencia because of the flexibility of being able to take online classes while traveling. It’s a little difficult to travel and train and take classes.”

His training regimen means long hours in the gym – and squeezing his studies in between.
In Orlando, he trains two times a day, five or six days a week. The workout is similar at the Olympic training center, but when a competition is coming up, they train three times a day – for an hour or 90 minutes each session.

At night, he checks in with his parents, Karl and Debra Jones, and hits the books. His plan is to earn a degree in business, and promote his clothing line, “Dollar and Dream.”

And while there are still a few more tournaments and then the Olympic trials – Omari feels pretty good about his chances. “Everything is not official yet, but I am in a great position to go to the 2024 Olympics in Paris.”