Valencia College Celebrates 200,000th Alumnus — and How She Overcame Obstacles in her Path

On May 8, Valencia College celebrated its 200,000th alumnus – and the person who walked across the stage and helped the college celebrate that milestone exemplifies not just the college, but the kind of students Valencia was founded to serve. 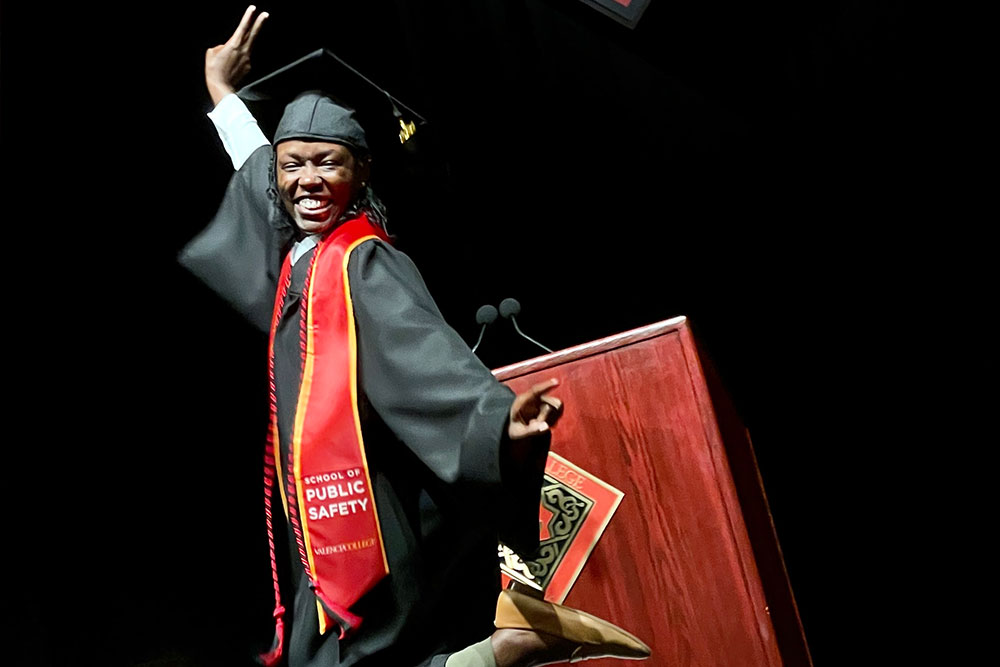 Wytosia McMillan was born in Sanford, but into a family for whom stability was a luxury they couldn’t afford. The family moved frequently, and, because of her parents’ health problems, she has never attended a graduation ceremony.  Not her elementary school graduation, nor her high school graduation.

This year, at Valencia, that all changed on Mother’s Day, for a young woman who gave up lot for her own mother.

“This was my very first graduation,” says Wytosia, 27, who graduated with honors with an A.S. degree in criminal justice. “Just attending, putting on the gown…I feel like I’m living what I should I have lived in high school.”

One of seven children, Wytosia and her siblings had a difficult childhood. As a child, she never knew when the electricity or water might be shut off. The neighborhoods where they lived peppered with the sounds of gunshots at night and, once, Wytosia even had a gun pointed at her head.

Only days before Wytosia completed fifth grade, her father died. She missed her elementary school graduation and her life changed immediately. “My mom got really sick right after that, so I went from being a child to an adult very quickly,” she says.

Eventually, the family landed in Valdosta, Georgia, where Wytosia attended high school for three years. However, her mother’s declining health would soon take a disastrous turn. In her senior year, only a month before Wytosia was scheduled to graduate, her mother was diagnosed with kidney failure — and decided to move back home to Florida.

“On the day of my high school graduation, I was sitting next to my mom in the hospital,” she recalls.

In Florida, Wytosia assumed she’d easily be able to transfer – only to discover that she needed to take a number of classes to graduate from high school.

“I had to start all over, because not all of my credits would transfer from Georgia to Florida,” she said. Discouraged, she enrolled at an alternative school in Apopka, which she completed in 2013.

After high school, she planned to join the military, but as her mother’s health continued to get worse, Wytosia decided to stay closer to home. 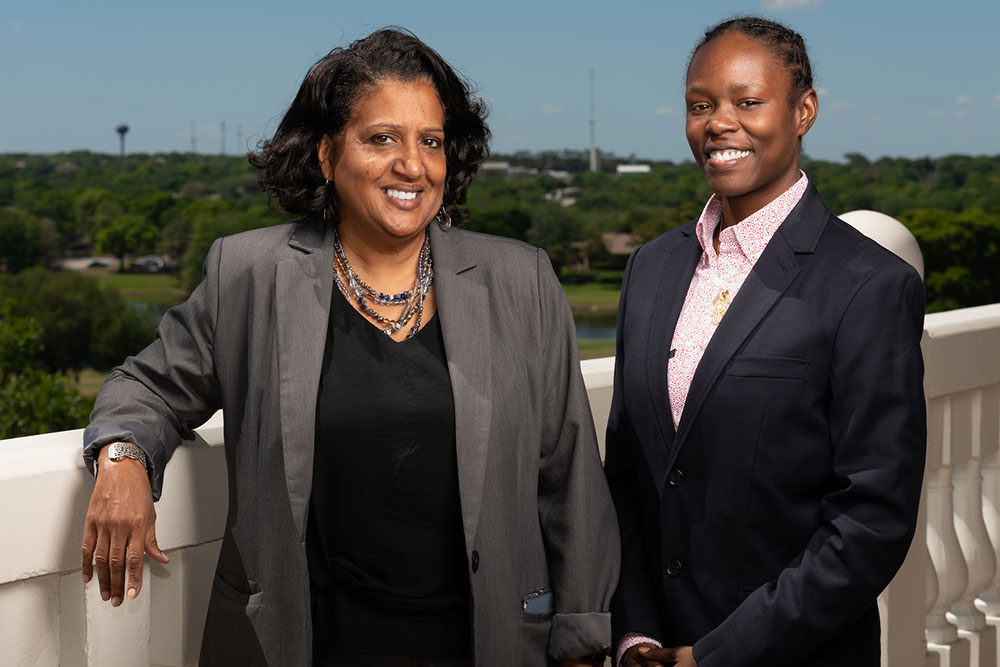 Which is how Wytosia ended up at Valencia College, where she quickly caught the attention of Professor Lauren Sykes, the chair of Valencia’s criminal justice program.

“I remember in our ice-breaker introduction exercise, being so impressed with Wytosia and her oral communication skill,” says Sykes. “She is always upbeat and positive and up for the challenge. Wytosia loves reading and writing essays. If she spoke about something, it was because she had done the research. This student stood out.”

In 2016-17 school year, Wytosia was thriving. She made the President’s List and was admitted to the honors program. At a national corrections conference, even the presenters took notice of this student who asked thoughtful, penetrating questions. She was, they said, a “superstar” student.

“My sister called and said we had to make a decision about my mom’s life because she wasn’t doing so well. I didn’t know how to continue school, plus full-time work, plus having a sick mom,” she says. “So I made the decision to drop out and focus on my mom.”

As the youngest child, and the last one still living at home, caring for her mother fell largely to her. “We were all hands on, but I felt the obligation to stay at home and take care of my mom,” she says.

One day, Wytosia just stopped coming to class. Sykes knew her mom had been sick, but didn’t know why Wytosia suddenly disappeared. She tried to contact Wytosia but got no response.

Meanwhile, Wytosia was working full-time at a call center and pouring much of her earnings into her mother’s care, paying for medications and doctors’ visits and whatever insurance wouldn’t cover. Wytosia gave up her apartment, and then her car, to help out, funneling that money into her mom’s care. Most of her siblings lived out of state and those who lived nearby had their hands full. One was battling sickle-cell disease; another had her house full with another sister and her kids.

But Wytosia felt she was strong enough to handle this on her own. After paying her mom’s bills, she usually was left with about $150 a month, which she used to pay for a bus pass, her cell phone bill and food.

“I was homeless because I thought my mom needed more of my money and my time. For two years, I was jumping from house to house, couch to couch. Before I gave up my car, I sometimes slept in my car.”

Eventually, however, the burdens overwhelmed her.

“At some point, I got very tired of living like that. I called Professor Sykes and left a message. I just cried and said, ‘I can’t do this anymore. I feel like I’m losing myself to the streets,’ “ she recalls.

That was the last time Lauren Sykes would hear from Wytosia – until 18 months later, when she got a call out of the blue. It was late 2020. Wytosia’s mom had passed away in 2019, and Wytosia called Sykes to see if she would serve on a nonprofit that Wytosia was creating.

Wytosia – who owed the college $1800 after dropping out and losing her financial aid – had given up on ever making it back to school. But Sykes wouldn’t hear of it. They soon began brainstorming ways to raise the money.

Together they decided to launch a Go Fund Me account and, within 24 hours, they’d raised the $1800 Wytosia owed the college. And, with a lot of help from her newfound support system at Valencia, Wytosia was soon back in class, earning As and wowing her professors.  She excelled in class and out of the classroom, and was a finalist to be named the college’s Distinguished Graduate this year.

She still has no regrets about stopping school to help her mom. “I didn’t want there to be a time when I looked back and thought, I couldn’t spend more time with her because I was focused on my life. I’m glad that I did because on May 19, 2019, she passed away. And in my heart, I know I made the right decision – to stay with her. I knew I could find a way to get back in school, but I couldn’t get the time with my mom back. I didn’t want to lose that time with her.”

Right now, however, she’s relishing the moment, and contemplating all that it means to finally walk across a stage to receive her diploma. Next, she’s transferring into Valencia’s bachelors of science in business and organization leadership. And she’s determined not only to break the grip of generational poverty, but to be an inspiration for students like her.

“To me, this commencement ceremony means a great deal,” she says. “It signifies my resilience against all my battles and all my tribulations. It’s not the image that matters but the feeling and experience that I’m grasping and holding onto for myself growth within life itself. At first, I was trying to hold on to my mom and dad’s legacy for them… now I’m trying to create my own legacy in a stronger stance that helps build upon theirs… while also, placing myself in the best beacon of light for others.

“I want the world to know that, against all odds, Wytosia made it, and so can you.”