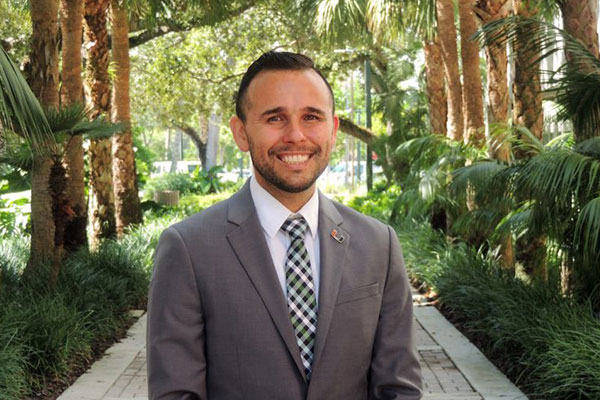 Against all odds, he continues to raise the bar.

When Angel Sanchez graduated from Valencia College in 2014 – and led his fellow graduates in a rousing chant of “we don’t settle, we succeed,” at the conclusion of his commencement speech – people at Valencia knew he was going places.

He had, after all, won a $30,000-a-year scholarship to continue his undergraduate studies. And he was already talking about law school.

That dream was all the more remarkable because Angel had been sentenced to 30 years in prison because he was convicted of  weapons possession and attempted murder as a teenager. In prison, he began working in the prison law library, earned his GED and a paralegal certificate, then successfully filed a motion to reduce his sentence to 12 years. When Angel left prison, at age 28, he moved to Orlando and stayed in a Salvation Army men’s shelter while he began taking classes at Valencia College.

Now, five years after graduating from Valencia College, UCF and the University of Miami College of Law at the top of his class, Angel is a vocal advocate for incarcerated teens and adults and the rights of formerly incarcerated people (whom he calls “returning citizens”) as they reintegrate into society.

Unlike most of his University of Miami classmates, however, Angel faces an uphill battle getting admitted to the Florida Bar and, ultimately, may not be able to practice law in Florida.

But that hasn’t deterred Angel, who has spent the past decade knocking down barriers and doing what others thought was impossible.

While many attribute that to Angel’s optimism and indomitable spirit, he points to a case that has been, he says, “my north star.”

For many years, Angel’s inspiration has been one man: Jose Diez-Arguelles, a former FSU student convicted of trafficking cocaine in 1972, who later graduated from FSU’s College of Law and, in 1981, successfully lobbied the state Supreme Court and the Florida Bar to allow him to practice law. After the state Supreme Court reviewed his case, heard from many of his law school professors and learned about the positive volunteer work he’d done in the community, the justices concluded that he had been rehabilitated and said they were hard-pressed to find a reason to deny him the chance to practice law.

“That story inspired me,” says Angel, now 37. “If you listen to those details, that’s sounds exactly like what I have been doing. He gave me a blueprint. What I learned from that is this is how you earn credibility: You get faculty behind you, you do public service. Subconsciously, I began doing all of those things until they became a part of my character. Now I’m always yearning to learn, educate, and help others — and I feel miserable whenever I’m not doing those things.”

So Angel has been busy: volunteering at the local prison, working on the University of Miami law review and organizing on behalf of returning citizens. In 2018,  he worked alongside singer John Legend as they lobbied for Florida voters to pass Amendment Four – an amendment that would restore felons’ voting rights — and he continues that work today as a leader for the Florida Rights Restoration Coalition.

He also volunteers with Exchange For Change, an organization that teaches writing in prisons. While others teach poetry and fiction writing, Angel tutors prisoners who are researching and writing appeals – as he did when he was in prison.

And, in his spare time, he does research and writes — such as this article, (with link) titled “In Spite of Prison,” which was published in April 2019 in the Harvard Law Review.

He also spends time with his nieces and nephews, serving as a mentor and positive influence in their lives while their mom finished serving a prison sentence. And now that his sister has been released from prison, he’s helping her re-enter society.

While Angel was in prison, his niece visited him. Today, he’s mentoring her.

Angel may take the bar exam to be eligible to practice in Washington, D.C. and a few other states, but he is toying with the idea of working in public advocacy for a nonprofit or even academia.

“I didn’t come to law school with the plan to practice being my plan A. If I had, that would have really unsettled me, now that I’m having problems applying to the Florida bar,” he says. “I came to law school to get the thing that has put me in front of cameras, that has made people listen to me, and publish my articles — to get credibility and the legal training to be a better agent for change.”

Yet, despite his optimism, he faces regular reminders that his path will not be easy.

During his second year of law school, when most students are applying for summer clerkships and fellowships, Angel was interviewed by 17 of the 20 law firms that arranged interviews for University of Miami law students.  That was an impressive number requesting interviews with him – but not surprising, given that Angel is in the top 10 percent of his class.

However, not a single firm offered him a job.

The reason, he later learned, was because most of the firms’ partners worried that Angel would never get to practice law in Florida – because of his prior felony conviction – and they opted to offer the job slots to others.

Angel accepted that and moved on emotionally – reasoning that he could take classes in summer and continue working as a research assistant for one of the university’s deans. However, when Sergio Campos, one of his law professors, casually asked where Angel would be clerking over the summer, Campos was shocked to learn that Angel had gotten no job offers. On the spot, he demanded Angel’s resumé and began personally shopping it around to different law firms in Miami.

Soon, one firm – Podhurst Orseck, which handles class-action suits– offered Angel the chance to be a law clerk.

It was a reminder, says Angel, of the power of professors and their willingness to advocate for their students. “Educators push you because they see your potential before you even see it,” says Angel.

That, he says, brought him all the way back to his days at Valencia College, where professors and administrators became Angel’s strongest advocates – and fought for him as he applied for (and later won) a Jack Kent Cooke scholarship, admission to UCF and a reduction of his probation (which he needed for admission to UCF.)

In his first semester at Valencia, he caught the attention of President Sandy Shugart at an event featuring then-Second Lady, Jill Biden. During the event, Angel stood to speak, asking Biden to use her platform to encourage all of the nation’s community colleges to help homeless students in the same way that Valencia does. After the event, Biden waded through the crowd to meet Angel.

“She introduced herself and he told a little of his story to her,” recalls Shugart. “I asked him to hang around for a few minutes, and after the event, he told me his story in detail. We’ve been friends ever since.”

“He wasn’t just a student,” says Shugart. “He was a brilliant student and student leader. As students go, he contributed heavily to the life of the college. He was in the Seneff Honors College, he was in the leadership track, he was very active on campus…After his first year, I invited him to speak at Academic Assembly so he could share his story with the faculty and staff who didn’t know him. He did a beautiful job, told his story and answered questions — and he got a long and thunderous applause at the end.”

“We say we transform lives with education,” adds Shugart. “I’ve never seen that more true and in bolder relief than in him.”

During his time in Orlando, at Valencia College and later at UCF, Angel, who Shugart calls “a natural born leader,” accumulated a throng of friends and supporters.

One of those was Cynthia Schmidt, an attorney who served as the coach of UCF’s moot court team. During Angel’s two years on the team, Schmidt discovered he was a consistently positive and hopeful person with a remarkable work ethic.

“I always felt that Angel was one of the hardest working members of the team,” says Schmidt, who was thrilled to see him place sixth in the nation as an individual orator during the Moot Court Nationals in Long Beach, Calif.  “I learned that even when he would go for a run, he would play oral arguments from Supreme Court cases, just to hear how good advocacy sounds, to learn the vocabulary and climb inside the mind of the justices. I have coached many people over the years and he is the only person I know who did this. He was serious about his success and he was — and is — hungry to learn.”

But she, too, is cognizant of the hurdles he faced –and will continue to face. Although Angel won the Order of the Pegasus, UCF’s highest student honor, during his time at the university, he was regularly reminded of his past. When Schmidt and another professor wanted to start a book club at the Orange County Jail. Angel was eager to help facilitate the book club – but jail officials refused to let him participate until after he’d been out of prison for 10 years.

Although he would love to stay in Florida and practice law, it could take years for him to get permission to join the bar. So one of his options is to take the bar exam in Washington, D.C., where a friend, former-felon-turned-law-professor Shon Hopwood, has offered to help him apply.

But taking the bar exam in Washington, D.C., would also give him the chance to work for one of the many social-justice organizations based in Washington.

Ultimately, however, his goal is to return to Florida – and work for change here.

“I’m starting to see my purpose in Miami,” says Angel, who once dreamed of going to law school at Yale University. “I was wait-listed at Yale, but now if I could go back in time, I would choose Miami all over again. I’m glad I didn’t get the offer that I couldn’t reject.”